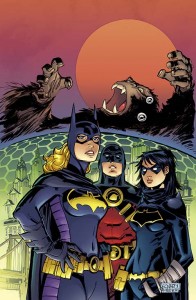 Comic book continuity is kind of like the Superbowl: If you know what’s going on, you care, and if you don’t, it’s just a bunch of very fit folks wearing tight costumes, running around and occasionally slamming into one another. So, when I got the chance to write a part of DC’s big convergence crossover, I was hoping to write a story that would satisfy die hard fans of the characters, but would also work for people who didn’t know Gorilla Grodd from an offensive lineman. So, if you’re a fan: Yes, that’s Stephanie Brown/Batgirl, Cassandra Cain/The Black Bat and Tim Drake/Red Robin, reunited at last! And, if you’re new to comics and/or superheroes: This is a two part story about a young woman who gave up the cape and mask and started a new life — only to discover that she has been chosen to fight as one of her city’s champions. In order to have a chance at winning, she’ll have to deal with some unresolved issues from the past — including her feelings for her ex-boyfriend.