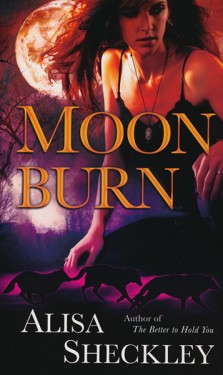 *** SPOILER ALERT ***
This book is a sequel and should be read after The Better to Hold You.

Some instincts are too powerful to deny.

In the past year, veterinarian Abra Barrow has gone through some major changes: She’s left Manhattan for the deceptively quiet small town of Northside, ditched her cheating husband and discovered that he has infected her with the rare werewolf virus. Now, Abra is finally beginning to feel like she has her life under control —

Except when the moon is full.

All of a sudden, Abra starts losing her temper – and her inhibitions – even when the sun is shining. Her new man, shapeshifting wildlife expert Red Mallin, seems to know more about her condition than he’s letting on, but he’s a little preoccupied with the strange creatures that have been crossing the dimensional border.

With her hormones in overdrive, Abra finds herself releasing the beast in all the men around her. As life in Northside becomes increasingly more peculiar – and more perilous – she must decide whom she can trust, when she’s not even sure she can trust herself…

Borders can be pretty dangerous places. People slip over them in the dead of night, bringing desperate travelers, contraband goods and stolen identities. I knew I was inviting in all kinds of delicious plot complications when I set my novel, The Better to Hold You, on an invisible boundary line between realities.

I tried not to think about the complications I was inviting by setting my sequel, Moonburn, on the borderline between paranormal romance and urban fantasy. At first, when I thought about writing a sequel, I thought I would concentrate on another couple, and leave my main characters to get on with the business of living happily ever after.

But the truth is, I’ve always had a bit of a problem believing that couples will transition straight from a passionately conflicted courtship to a stress-free marriage. In my novels, I’ve always ended things optimistically, but assumed that there was another book, never to be written, about what happened next.

And all of a sudden, I wanted to write the forbidden book. In The Better to Hold You, my heroine, Abra, becomes infected with the lycanthropy virus and discovers how to listen to her instincts. But what if her condition continues to change, and her instincts, and her impulses, become harder to control?

In The Better to Hold You, lycanthropy was like an STD. In Moonburn, it’s a bit more like tourettes…if tourettes made you irresistibly attractive. What if you couldn’t suppress your reaction to every shmendrick who pisses you off at work…or your response to every passing flicker of attraction? That’s what Abra’s dealing with in Moonburn.

As for Red — well, I’ve always known that he is concealing a very complicated past. He’s a shapeshifter, not a werewolf…and in this novel, we find out just what that means.

Add to the mix the complications of an ex-husband and his girlfriend living way too close for comfort, and I knew I had all the makings for an emotional and supernatural showdown.

And yet I know that I’m probably crossing a line. In urban fantasy, relationships do progress past the stage of first courtship. But urban fantasy is often more about the world and the mystery than about one central relationship.

Which side does Moonburn fall on, PR or UF? I say squarely on the border between, but I look forward to hearing what you think.

Moonburn is mentioned in Alisa’s interview with Tim O’Shea. Read the full interview on TalkingWithTim.com!

“Sheckley deftly executes an intriguing, inventive story that hooks you from the start with a plot that weaves together supernatural and contemporary worlds. WIth a strong heroine surrounded by distinctive, colorful characters and a good amount of romance, action and folklore, this is a tale that will keep readers enthralled.”—Romantic Times BOOK reviews – 4 stars