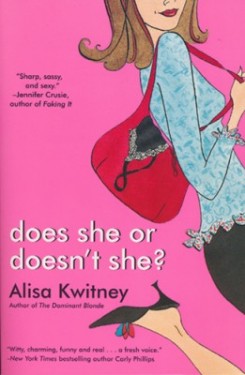 Read An Excerpt»
Passion. The kind of tear-your-clothes off, scream your lungs out, crash into the furniture passion that changes lives.

It’s what Delilah wants. It’s what she craves. It’s what she fantasizes about whenever her disinterested husband’s not around. Okay, so it occasionally makes her late for the school run and distracts her from the fact there’s no food in the fridge, but an elaborate fantasy life is a basic requirement for a fledging soap opera writer.

Lately, though, the oddest things have been happening in Delilah’s real life. First, she discovers a couple of skeletons rattling around in her husband’s closet. Then, she learns that the insolently sexy plumber who’s been fixing her pipes and starring in her daydreams is really an undercover FBI agent. And now all the clues seem to point to the conclusion that she’s the only person in New York City not carrying on a torrid affair. Which she intends to do something about. Or does she?
Because there’s nothing more dangerous than acting on your secret desire.

I’m often asked, Where did you get the idea for this book? The answer is usually that I stole it. In the case of Does She or Doesn’t She? I stole it from James Thurber, who wrote a short story called The Secret Life of Walter Mitty, which was turned into a film by the same title, starring Danny Kaye. In the story and the movie, Walter Mitty is a bit of a nebbish (a milquetoast, as my English mother-in-law would say) who loses himself in various daydreams of heroic adventure and romance.

I decided that my version would have a female protagonist, someone who had already been through the dating wars and was now trying to negotiate the dangerous peace of marriage. I imagined it as a book about the fantasy of romance versus the reality of a marriage that had lost its sense of romance. The working title of this book, not surprisingly, was The Secret Life of Delilah Levine.

Another question many people ask is, How much of this book is based on personal experience? The answer is, some of it’s cannibalized from my life, some of it’s scavenged from other peoples’ lives and some of it I concocted from scratch. I am intimately acquainted with the slice of New York life depicted in the novel, and I do think that almost all marriages go through a phase where the husband and wife live under one roof but occupy separate mental states.

Some marriages continue on parallel fantasy tracks for the long haul. Others find a new way to connect. And then there are the derailments. I won’t tell you which way Delilah’s story goes, but I assure you, it all ends well.

Genre Spotting Contest: In Delilah’s fantasy sections, I tried to cover most of my favorite genres, including historical romance, paranormal romance, romantic adventure, World War II espionage and the old TV series Bewitched. Okay, I know that’s not a genre, but hey, it’s a fantasy.

“Alisa Kwitney is my guilty pleasure.”—Neil Gaiman, Hugo-award winning author of American Gods and NY Times Best-selling author of Coraline on DOES SHE OR DOESN’T SHE

“Witty, charming, funny and real, Alisa Kwitney brings a fresh voice to Chick-Lit and Romance!”—Carly Phillips, New York Times Bestselling Author on DOES SHE OR DOESN’T SHE

“Sharp, sassy and sexy.”—New York Times Bestseller Jennifer Cruise on DOES SHE OR DOESN’T SHE