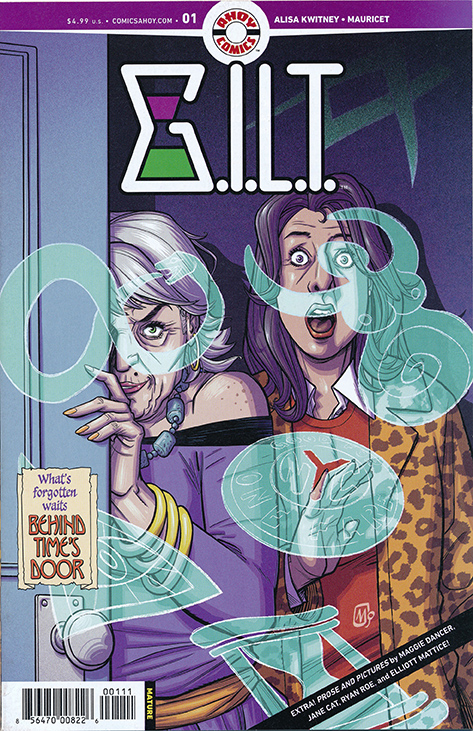 G.I.L.T. follows two very different women whose lives become entangled when they both slip through a portal in time to the day they first met in 1973. There’s Hildy Winters, a bawdy, outspoken old broad with a pack-a day habit and a very desirable apartment on New York City’s Upper West Side—and her very own time-travel portal. Hildy belongs to G.I.L.T., the Guild of Independent Lady Temporalists. Their prime directive: Do not alter the past without co-op board approval! Then there’s Trista, the Bill Murray of home health care aides, a cynical screw-up who doesn’t care for anything but her Fleuvog shoes and her paycheck. She meets her match in Hildy, a sarcastic second-wave feminist living on a steady diet of cigarettes and regret. When Hildy seizes her last chance to return to a fateful day in 1973, she accidentally takes Trista along for the ride. But as the old saying goes, there are no accidents in time travel. And Hildy and Trista don’t remember each other, but they met each other forty years earlier—on Hildy’s wedding day. Now they’ve got to come to terms with the past before they accidentally dismantle the future.

“Full of smart, sassy dialogue and the art Alain Mauricet is known for, G.I.L.T. will grab on and take you through their journeys through time. And you’ll be glad you did.”—GEEK VIBES NATION

“It turns out time travel is just another perk of living in the Upper West Side. It’s not every comic that can be described as a fusion of The Golden Girls, Sex in the City and The Twilight Zone, but that sums up G.I.L.T. in a nutshell. Short for “The Guild of Independent Lady Temporalists,” this new series from Ahoy Comics is a romantic comedy that just so happens to feature a healthy dose of time travel to boot.”—IGN