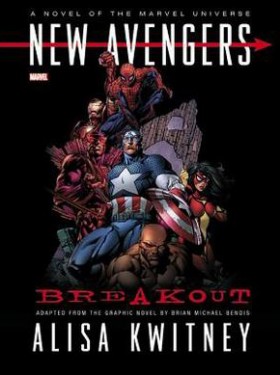 Fantasy/romantic fiction/comics author Alisa Kwitney Flight of Angels, Moonburn) reveals the secret backstory of Avengers couple Hawkeye and the Black Widow. Under secret orders to assassinate the Widow, the rough-edged marksman finds himself caught up in a violent prison break that releases some of the world’s most vicious and powerful criminals. Defying his superiors, Hawkeye joins forces with the sultry Russian spy — and with a mismatched group of personalities that include Spider-Man, Spider-Woman, Luke Cage, Captain America and Iron Man. Unexpected betrayals and shocking revelations will lead the team from Manhattan’s top security Raft prison to the untamed jungle of Savage Land in dramatically different take on Brian Michael Bendis’ blockbuster Avengers comics debut. Learn the sizzling backstory of your favorite big-screen heroes in this adaptation, inspired by the best of page and screen!