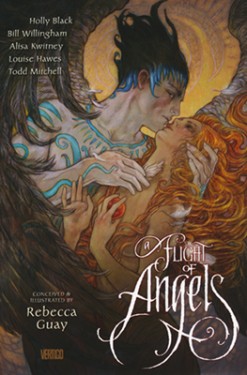 Alisa joins bestselling YA author Holly Black (Tithe, the Spiderwick Chronicles), Bill Willingham (Fables), Louise Hawes (The Vanishing Point), and T. D. Mitchell (The Traitor King) to explore the diverse mythology of the celestial in A Flight of Angels. From tales of the dangerous to the all-powerful to guardian angels and angels of death, A Flight of Angels is a gorgeous graphic novel lushly painted by Rebecca Guay.

Deep in the woods outside of a magical kingdom, a strange group of faeries and forest creatures discover a nearly dead angel, bleeding and unconscious with a sword by his side. They call a tribunal to decide his fate, each telling stories that delve into different interpretations of these winged, celestial beings: tales of dangerous angels, all-powerful angels, guardian angels and death angels, that range from the mystical to the mysterious to the macabre.